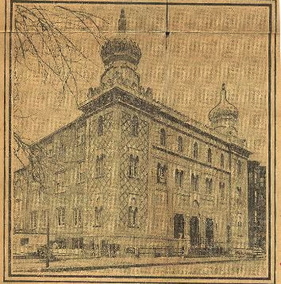 The Friendship Baptist Church was organized in 1910 by the late- Rev. Marcellus French Logan at 393 Elton Street. These services were held in the living room of Mrs. Nana K. Raspberry, one of the founding members. Soon afterwards the church relocated to 447 Elton Street, which is currently the Bethelite Institutional Baptist Church in East New York.
On April 15th 1913 the church elected the Rev. Albert C. Matthews, and less than a year and a half later on October 4th, 1913 the church received their official incorporation certificate.

Following the incorporation of the church in 1913, the next several Pastors were Rev. Edwards, Rev. Ardis, Rev. Bouten, Rev Downey, Rev Umdadonna, and Rev. Weeks. Our one family that knew most, if not all of these pastors, and is still within our worship services are Mrs. Briggs and her husband. The families joining the church between 1913 and 1934 were Deacon & Mrs. J.M. Carter and family, the Gaters, the Burchetts, the Raspberry's, the Batsin's, Deacon and Mrs. Long and Family, Mrs. Sealy and the Lawtons.

In 1944 the final mortgage papers for 447 Elton Street wet burned and the Friendship family was clear of all debts. July 1949 the purchase of a church building on 293 Howard Avenue, the Progressive Baptist Church, was finalized. On Sunday August 21, 1949 the Pastor and congregation marched from 447 Elton to the new church home.

May 17th 1966 the purchase of the Kismet Temple was made for the price of $250,000. On Sunday May 29, 1966 after a brief service, the Pastor and congregation marched to their new house of worship on Herkimer Street.

By the grace of God, and the vision of Rev. Whitfield on Sunday September 9, 1984 at 3:30pm, the mortgage of the Friendship Baptist Church was burned, in the name of the Father, the Son, and the Holy Ghost. For fifty-nine years the Rev. Dr. Whitfield led the Friendship family with courage, faith, belief, and perseverance.

On Saturday June 26th 1999, the Friendship Baptist Church called the Rev. Craig B. Gaddy Sr. as their new Pastor, and on Sunday October 3rd at 5pm, Rev. Gaddy was installed by the Rev. Eugene King and the Southern Baptist Church of Manhattan.

The Friendship Baptist Church has endured the rigors of 104 years in the service of Jesus Christ. We believe and attest that we have come this far, and will continue to exist as an institution of faith so long as we adhere to, upkeep and implement, the living word of God.